Like any medical procedure, the pros and cons of routine mammograms must be considered carefully. Often screening for early forms of breast cancer leads to over diagnosis. That is, the detection of pseudo-cancers or noncancers – cancers that would not cause harm, during a woman’s lifetime, if they were left alone. These cancers tend to get treated aggressively such as repeated mammography scans, undue biopsies for thousands of women, and often both breast mastectomies.

Out of fear, and without more information, women who have one healthy breast choose to do a double mastectomy. According to an article from Mount Sinai Health System in the Huffington Post, “It is a misconception and not true when a woman is told that the other breast is high risk for developing cancer. There is an incredibly low, half percent, that the other healthy breast is likely to develop cancer.” 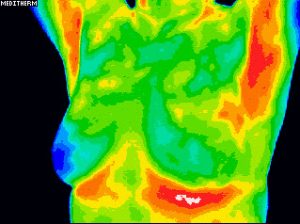 The benefit of Digital Infrared Thermal Imaging (DITI) is that it offers earlier detection of breast abnormalities than is possible with a self-exam, doctor exam, or mammography. Thermography is a lesser known, but increasingly popular, screening test that works by imaging thermal patterns. A thermogram does not “see” tumors. It is a physiology test measuring subtle differences in skin temperature that can be associated with an underlying tumor (as well as other pathology). It is important that women know about this option!

Thermography allows time to adjust diet, beliefs, and lifestyle to transform abnormal cells before they become cancerous. It can detect lymphatic congestion and hormonal imbalances as well as monitor dietary changes. In short, thermography is a tool to monitor breast health, not just a way to find disease! And there is no radiation or breast compression involved, safe for pregnant and nursing women.

The most important point that is never mentioned is that breast cancer risk is largely modifiable. You can take responsibility for your breast health. Only 10-15 percent or less of breast cancer cases have any genetic component, which means that 85-90 percent of risk has to do with other factors, such as diet, stress, environmental factors and emotions being the most important.